The Dwarves strike back!

I have finally finished converting and priming my EM4 dwarf warriors after a really long break.
I gave them GW Dwarf warrior axes and command bits to make them look a bit more grimdark.

The first dwarf on the left was my colour scheme test subject so he has some basic paints and a wash slapped onto him. I think they look pretty darn decent in large groups, especially considering their price (7.70£ for 50 miniatures).

I'm hoping to finish painting by the end of the month as an exercise in speed painting.
I'm also hoping to eventually expand my collection with 20 GW Hammerers, 12 Thunderers, 20 converted Longbeards, a converted BSB and an Organ gun.

Also, the lord in the middle is an Avatars of War figure and my favorite dwarf figure in existence.

Oh my, it's been a long time since my last post...
Anyways I haven't done much these last few months, except maybe this: 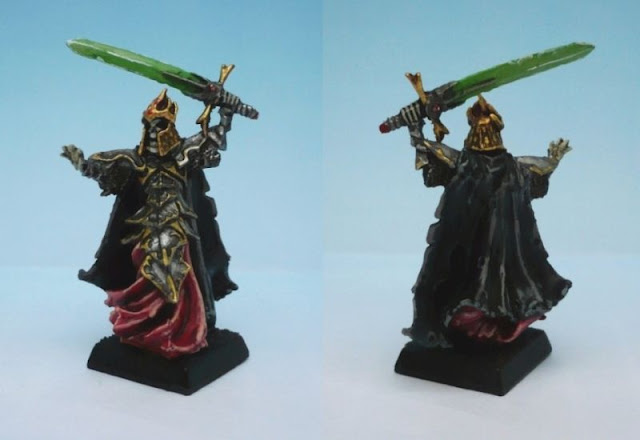 I've painted up my first Reaper Bones model!
It's not one of my best works, but it still provided me with some valuable insights:

First of all, I base-coated the model using a matte black spray, which is apperently something you shouldn't do when it comes to Reaper bones range. Unfortunately, it was already too late when I discovered that particular piece of information. The applied coat of spray can paint never seems to dry properly and it leaves a somewhat glossy coat of paint on your miniature.
The company's tutorial recommends applying paint straight onto the model.
I'll keep that in mind for the next time.

Secondly, because of the nature of the material, washes behave differently when applied to the miniature. They seem to pool a bit more than they do on regular hard plastic, but it's not a major issue. Just something too keep in mind so you can adjust your painting technique accordingly.

And the last thing I'd like to say is that this model was fun to paint and if you're trying to assemble a low budget army or just in need of some D&D models, I'd say that it's more than good for its price.
Posted by Silver Wolf at 14:08 No comments:

Nurgle Hero on a Daemonic Mount

Long time no updates, it seems.
Real life kicked in and it kicked in hard so I didn't have too much time for Warhammer.
I've turned to drinking and playing D&D though, so not all is lost.

Oh and here's a small update: 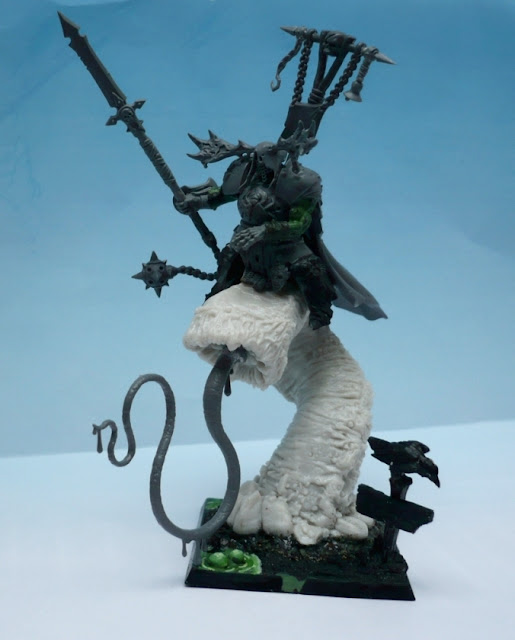 This Nurgle hero on a daemonic mount is made from a variety of bits, so feel free to leave your question in the comments if you're interested in anything specific.
The mount is "Great worm" from Reaper Bones range.
Posted by Silver Wolf at 01:41 No comments:

Email ThisBlogThis!Share to TwitterShare to FacebookShare to Pinterest
Labels: Nurgle, Reaper Bones, Warriors of Chaos, Warriors of the Dark Gods

Here's yet another one of my projects featuring Tehnolog miniatures:

After picking up Tehnolog Minotaurs, I decided to try and convert some Tehnolog Ogres as well.
So I went and picked up 8 of them for measly 5.40$ on eBay.
I decided to make them more Chaos-like using different bits at my disposal.
And this is the result:

The models come in plastic bags and are pretty much similar to minotaurs in every way, so I won't be making another review. Size-wise they are slightly bigger than GW Ogres.
Superglue sometimes doesn't work perfectly on these guys, but I have no idea why.

I really like the way they look and I actually prefer their style when compared to GW Ogres.
They look good enough to be used as Chaos ogres even straight out of the bag. But since they only have four variants, I do recommend at least minor conversions just to make them look a bit more diverse.

And here are some photos of the converted models:

Email ThisBlogThis!Share to TwitterShare to FacebookShare to Pinterest
Labels: Tehnolog, Warriors of Chaos, Warriors of the Dark Gods

The whole giant was made using a 2$ monster toy, some leftover Maggoth lord bits (legs, belly), Giant head and weapon bits (got a bundle on them on eBay for a really low price), a few additional small bits I had in my bits box and some putty (almost exclusively Milliput in this case).

The whole project didn't require too much work and I'm quite satisfied with the way it looks.

I also have some additional bits from the giant bits bundle I picked up so I'll probably use those to make another giant, this time for my O&G and/or Beastmen army.
Posted by Silver Wolf at 12:32 No comments:

Email ThisBlogThis!Share to TwitterShare to FacebookShare to Pinterest
Labels: Nurgle, Warriors of Chaos, Warriors of the Dark Gods

The day is finally here!

After a long time abroad, I returned home and opened my first two bags of Tehnolog miniatures.

On the first glance the material Tehnolog uses for it's miniatures seems very rubbery in nature, but in actuality it isn't that bendable. Only some the thinner weapons seem to be bendable while the rest seems quite durable. I'd say that's a good thing for the purposes of gaming, as these miniatures can take some battering without being damaged.
The downside of this is that it's sometimes really hard to remove mould lines. That being said, I have to say that there aren't may mould lines on these models, but you will need a very steady hand and a sharp knife to remove them without leaving any traces or deep cuts on the surface.

Now onto the design...


The models themselves don't have a lot of details on them.
This might be a big problem for people who are used to high end plastic miniatures.
Personally, I find the swords the most problematic. They seem to be very cartoony in design and unfit for savage beastmen look. Some bodies also seem to lack details in their belly area.
Because of that, I decided to use some of the more abundant ogre bits in order to cover the problematic areas, as seen on the picture above. It worked quite well in my opinion and the miniatures have a more serious look now, as well as some additional details on the areas that needed them the most. The only thing missing now is a big set of horns for the champion and some gory trophies, which should these models that full Grimdark look.

One thing worth mentioning though, is that Tehnolog minotaurs only have four fingers on each hand and Games Workshop Ogres have five, so if you're bothered by this you'll either have to scrape some off or pick up some putty and sculpt additional ones. Another option for less skilled folk out there could be giving them stumps and saying that they lost some of their fingers in the heat of battle.


Size-wise Tehnolog minotaurs compare very well to the latest Games workshop minotaur models, although they are less muscular and thinner in general. They also fit well on 40mm bases.

Tehnolog minotaurs may be less detailed than some of the other products out there and may require some converting and painting skills in order to blend in as proper tabletop gaming pieces, but for the price of only 3$ per four figures I have to say that these toys are a real bargain. Encouraged by this, I also picked up some of the other Tehnolog prodcuts, such as Ogres and Daemonic cannons. More info on that topic later.

Big thumbs up from me!
Posted by Silver Wolf at 20:27 No comments:

A long time ago (three years ago to be precise) Pro Gloria miniatures company launched a kickstarter containing beautiful Landsknecht miniatures. Unfortunately, the kickstater did not reach the required goal, and the company (along with the sculpts) was bought by Warlord games.

And now three years later, it seems that those miniatures will probably see the the light of day!

Some sources say that the sprue was modified a bit and that it contains less different body sculpts than Pro Gloria originally had in mind, but it also seems that Warlord games added some additional armaments into the mix.

Personally, I hope that the sprue will contain some halberd heads, just like the original release was supposed to. Although I doubt this, since the original release was also heavily merchandised on WHF-related forums and Warlords games seem to be more historically oriented (at least Pike and Shotte product line). The back of the box is showing off one halberd, but that is probably just a single sargeant/doppelsöldner upgrade. 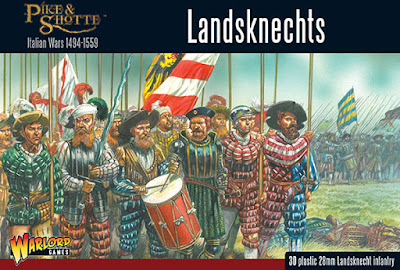 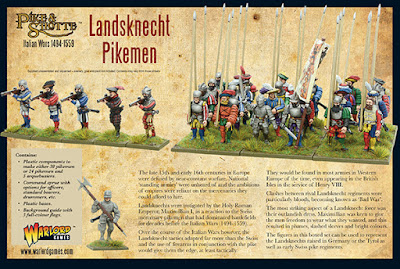 In any case, I'm very excited and I'll be getting at least one box as soon as possible!

And it seems like my Empire army will be getting one more regiment after all.
Posted by Silver Wolf at 02:11 No comments:

"The Forge of War" is a Warhammer fantasy blog focused on painting, models, battle reports and other aspects of wargaming.